ON A MISSION TO JALALABAD

Went on a one-day mission eastwards through the mountains and down into the delta of Jalalabad. Stood up like soldiers most of the way, our heads and torsos right up through the skylight of the vehicle as sunday-leisure-targets for the Talebans hiding (according to the ANSO warnings) somewhere out there between cliffs in the caves, - colonel! I said to our Norwegian ally, - ‘tis better to die standing as a free man under the sky of blue than getting crushed in a banal car-crash like herrings in a tin can, isn’t it! From deep below the enormous and overloaded and carnival-clad Pakistan trucks slowly, feet by feet, crawled upwards and here and there had a total breakdown causing tailbacks and here and there a head-on collision, bits and parts of metal and meat spread out over the Swedish sponsored tar, a couple of bypassing gypsies staring into the steaming remains, and then, once of a sudden, the grey crack in the mountains opened widened spread out a valley of sudden spring, colours, the crisp green of grass and rice fields among clay huts, castles of clay erected on shells of missiles from the war, far out a native like a heron in the low waters, and still standing we entered Jalalabad in the good old colonial style like superior beings, the natives looking up at us as if in disbelief, their feet in the roadside mud beside their sugar cane sellers carts or mandarin sellers carts or on their slow way home from the Fridays prayer, their holy days clothes squirted with mud, our Norwegian ally blank like a king on a coin, like general Patton on his victorious way through Europe, - colonel, I said, - which of these natives staring at us from down below would thou consider as Talebans? - Don’t know, he said. And somewhere high in the sky above us the airplanes carrying all the European aid-workers who no longer are allowed to drive through this scenery of late afternoon glooming colours because of the threat from road-side bombers, suicide bombers, kidnappings or mere old fashioned road pirates, - Talebans, I said, - what Talebans, where?!

On our way there and back we did quite a few scenes, stopped the car and just stepped out, I carrying the flag bottoms up like a crutch under my right arm until, once of a sudden, I turn I a let the wind unfold it and carry it for a while along the sea bank among the grassing camels, their gypsy owners staring from somewhere outside the frame their faces mere masques of dirt, or I appear from above descending through a bare rift in the mountains, or just appear out of nowhere over a dune in the bronze glooming desert, the mountains everwhite shining in the distance, - let’s stop at this rice field! I said to our native driver. - This is Nuristan, our native driver says without slowing down. - Interesting, I say, - let’s bring out the Flag! - Most of these peoples are Hezb-a-islami peoples, he says and continues, - the peoples of Hekmatyar, you know. - No, I say, - I don’t know, let’s have a look at them! - Hekmatyar is the leader of Hezb-e-islami, our Norwegian ally sayd, - he was responsible for seventy percent of the destruction of Kabul. - Aha, I say. - They don’t like any foreigners! our driver says. - One never knows! I say, - let’s give it a try!

But they wouldn’t and so we didn’t and I had to settle for the hooting of bypassing cars stuffed with natives staring out at the first spring mirage: I white man in suit and tie coming down from the mountains carrying the flag of the Talebans, a missiles hole in the centre. 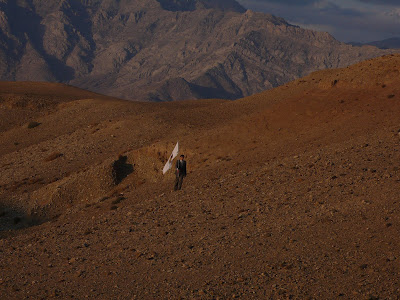 The photographs are intriguing. Isn't the tank the one on Bibi Mahru hill in the middle of Kabul? The hillside shot of the author also could be on one of the hills around Kabul. Could the entire piece, perhaps, be an exercise in creative writing? Nicely done, though.