At the End of the day I finally arrive at the theatre. In that grey and yet luminous light of Kabul dusk, exhausted and covered by the dust of History I stand before those huge old battered rusty gates. The growing train of jeering dirty children with swollen-red frost-bitten hands now dissolving behind me in the vanishing light. For the last time in The History of The Democracy I have these native children polish my boots, then I knock at the gate. I wait for a while, an eternity, and then the mythical hundred years old Mongolian guard living alone in the ruin opens and enter I do. Silence. The distant murmur of traffic, barking dogs, weeping mullahs, God’s holycopters ...

According to the Masterplan that brought me here from old Europe, I will, at the End of the day - after five years of restless wandering the political world stages, from Europe through Kuwait, Iraq, Jordan, across the US to Dubai, Iran, from the Afghan mountains so white and down through Kabul - I enter the stage of the National Theatre ...

Now, at the final rehearsal of the Parliament and in the good old colonial fashion - without informing the natives en avant - I enter the stage exactly when the last word (in Dari!) has been said, the Archictect on his knees the popular crown on his head covering his eyes, two trains of singing children arriving from behind the audience to form that final traditional “jirga” circle. I put the flag to a stand at my side, and so, here I am, nothing more to say, after five long years on the roads of reality I am back home in that good old and safe fiction.

- No! the actors said, in unison, and pointed me out!, - we cannot have this person on our stage! - But, I said, - I don’t say a word, I come with peace, friendship, I come with the best intentions! - No! they said, - we don’t care about his intentions, maybe they are good, maybe they are not so good, we don’t know, the audience don’t know, what they see is a white man with a flag. - The Flag of Friendship! I tweeted, - Bajrache Dusti! - Just another foreign invasion! they said, - we want this person out, now! this is our performance, this Parlaman belongs to the Afghan people! - But I wrote the script, I schrilled, - the vision is all mine, the words that you oh so pathetically utter through your little puppet mouthpieces are all conceived and written down in Europe, how could History ever become yours?! - Out!

And the flag? - We keep the flag, said the director, Qadr Faruq, that Afghan Don Corleone. And so they did. My flag! Well, luckily they didn’t get that very far with it. As soon as the censors from the Ministry of Information (and Culture) saw the flag they imposed their veto: - Stop! they said, - that flag, there is a hole in it! Something is missing! You have to fill in the missing symbol, what does it mean? - It means Dialogue and Peace! said the director. - Then you must write this on the flag, so that every Afghan will know the meaning of the flag! - But it is a symbol, I said, - a flag is a symbol, you don’t write the meaning of a symbol onto the symbol, because then it is no longer a symbol! I said. They didn’t answer. I guess they never heard me. They filled out the hole in the flag and wrote the supposed meaning, UN-blue on white:

PARLAMENT IS THE SYMBOL OF PEACE AND DEMOCRACY

Fortunately it was a copy. - Here you are! they said and handed me the original, the good old white flag with it’s circular lack of meaning.

And so. Here I am. Still alive. In Kabul, Afghanistan. Of all places. They didn’t want me here. - Out! Homeless. Back on the road of world History. Older. Skinnier. Lonelier. Colder. Without destination. - Where do I go from here?

It is dark now. The stars above. The barking dogs. The weeping Mullahs. The helicopters. Above all.

- So, where do you go next? said one of the few female actors among the new generation of “Aftab”. - I don’t know, I said, - I’m just so cold. - Why don’t you go to Pakistan, she said. - Pakistan? I said, - you think I’d be killed there? - Go to Pakistan! said one of the young female artists of CCAA working in the monastery ambience of a shotgun shack behind crumbled walls somewhere in the outskirts, - they really need it in Pakistan! - Need what? I said, still far to cold to think. - Freedom, she said, - Democracy, you!
- Me?

And the dogs they bark, the mullahs weep, God’s holycopters never sleep. 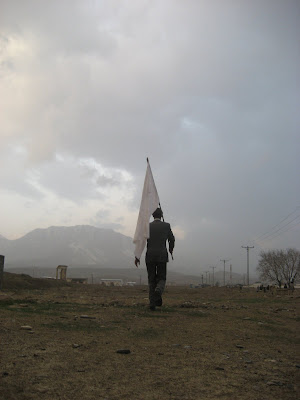