Every morning I wake up to the weeping of mullahs from the nearby mosques, crackling, rattling cartoon-voices, that is what I hear at the break of another dust-day. That’s why they got so offended by the Mohammad cartoons, not because of the bomb in his hat, not because of his pigs head, no, because he suddenly was seen exactly the way they sound: a cartoon.

The thing is I planned another walk under the Flag of Friendship through this city of dust, I just haven’t been able to tell you (do you listen? art thou there?), because I promised my Norwegian allies not to mention it on my head-on-the-blog. So now you finally know you don’t know and even why. I even promised them not to walk alongside any of the seducingly attractive swarming roads that they drive along every morning on their way to the theatre and every late afternoon on their way back again, because, as they said, we are going to drive this way every day for a long time when you (the one or the other way) have gone. I promised them. I’ll even try to keep my promise.

My favourite native Mahmud has gone to Paris (to go to Brasil (yeah, those bloody natives have an easy way to fame, they have a history, the come from an oh so spectacular warzone, and that’s what they like the curators and producers and agents in the arts-scene hot-spots in London, Venezia, Sao Paolo, Tokyo and Paris)), and so I had to replace him by this sweet wannabe-actor boy Khalid, soft as milk, I might have known, yeah, but I had to have someone, so I made an appointment (can’t tell where, can’t tell when, due to the risk of being cartooned) with him and Reza about an additional filming of an additional walk through a bit more spectacular and populated swarming exotic part of the city. And then last night as I sat on the balcony overlooking the darkened city of dust under the glittering stars, I called them, just to confirm, and then of course, - Mister Nielsen, there is new problem. - What problem? I said, turning the white out of my hard boiled eggs, - what bloody problem? - The cartoons, you know, sir, from Denmark... - Nobody knows I’m from Denmark, I said, - I’ll say, I come from Iceland, or Patagonia, I don’t mind. - Oh, no! he wept, - it is all foreigner, you know today this professor (I guess he meant mullah or mufta or kufta or Kafka or whatdoIknow) announced that all foreigners in Afghanistan must be killed until Danish government apologize. - Christ! I said. Cowards. That’s what they are. Don’t tell me (they do!) they are afraid, I am going to get killed by the mob, it is their own soft milky skin, they are afraid of having scratched, - come on, I said, - tomorrow at 3:30! 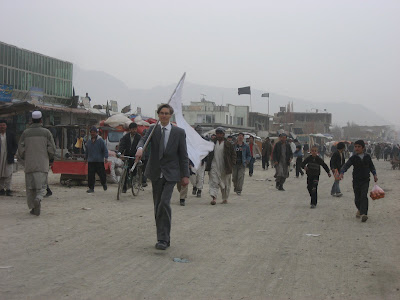