In the endless gaps opening between every ever so small attempt to gather the team of natives needed for the expedition - the long walk under the Flag of the New from the mountain and down towards the centre of Kabul - in the hours and hours of waiting and hanging around the theatre, I have thrown myself into some amateur archaeology. This is my first humble result:

On the edge of our excavation at the National Theatre in Kabul we have come upon this object: 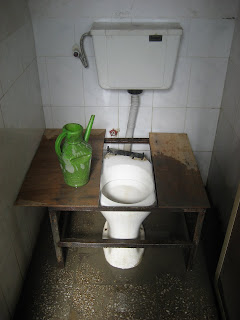 In the early stratum (about 20 bt (before Taleban)) you see the reminiscence of a white porcelain object, a so called toilet or lavatory bowl. The users of this bowl - the bearers of the short era of Afghan modernity - seem to have appeared and done what they had to do (and what they possibly could do) and then disappeared. The descendants seem to have been of a completely different species, having absolutely no idea of the meaning or use of the white porcelain object. Nevertheless in their eyes the object must have had a certain aura, enigmatic, powerful like a holy object. Unlike the anti-modern Talebans and the Mujahedins who would have understood and thus destroyed the bowl as a sign of modernity, these present descendants haven’t dared to destroy or even move the white object. They seem to have feared or at least respected the white representative of an invisible god. And so they have had to built their more primitive form of civilisation on the enigmatic object: Two wooden boards have been placed on top of either side of the white object, and at the sudden the call of nature the user has had (and still have) to climb the construction and stand one foot on each board to be able to drop what was (and is) no longer bearable between the to boards through the hole in the white relic of modernity and into the everlasting (and everstinking) darkness of the present.

Though literally post-modern the present descendants are not to be categorized as completely ignorant. On the contrary the fascinating construction with its multiple strata of civilisations, the recycling of forms left behind by an earlier civilisation, shows us an ideal example of reformism. Unlike the revolutionary iconoclasm of the Talebans who blew up the thousand year old Buddha statues carved into the mountain in the north of the country, who closed down all TV-channels but their own and banned the women from almost any visibility in the public arena, and unlike the Mujahedins who - according to my research among the native actors at the National Theatre - used to threaten the kids in the villages from going to school because education was = the Evil, the present descendants with their recycling of forms left behind be an earlier civilisation, show us a patient though blissfully ignorant respect for the Lost Modernity, an exemplary form of reformism that from now on is to be known as: