THE FLAG OF TALEBAN

I didn’t read that many books on Afghanistan or Afghan culture before I got here. Who cares about Afghan culture or the History of the peoples surviving here? I thought that if there was any, culture or history, it would all be present when I got here. And so it is: Yesterday our Norwegian allies kindly informed me that the flag of Taleban used to be (and I guess it still is) white. Which means that the flag that I am going to carry from the outskirts of civilisation through the entire city towards the centre of Kabul and the National Theatre is the flag of Taleban with a hole in it’s centre. And the question is: What does that mean? Or rather: What is it going to mean? In the eyes of the Afghan peoples that I am going to pass on my way: A skinny bleak Westener dressed in a grey suit, white shirt, grey tie and a pair of second world war military boots carrying the flag of Taleban with a hole in the centre into the capital of Afghanistan, what does that mean? That is the question. And the answer is: Nobody knows. That’s why - against all these odd odds - I have to do it: So that we & the world will finally know. What it meant.

And then again: I can’t help wondering: Will they start shouting or, better, shooting at me? And if, then who? The new NATO-trained Afghan soldiers who think that I am an incredibly disguised agent of Taleban? Or the disguised Taleban agents who thinks I am a walking three-dimensional Muhammed-caricature? Or the special Operation Enduring Freedom fighters who think that I am some kind of albino son of a Pakistan madras mullah sent off to be trained in a subterranian London mosque and now returning as the avantgarde of the updated version of Al Qaeda, a new incarnation of bin Laden? God knows. No. He doesn’t. I’ll just have to do it. And then we’ll see. Won’t we? God?! 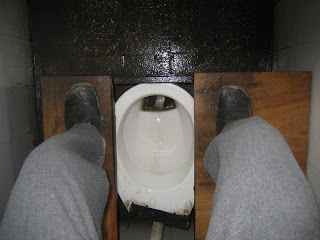 Hello Sir, I have not heard from you since last e-mail I sent. Just wonder how things are & if you received my email. It seems that you are already in Kabul. Hope all goes well & I've envious feeling for not having been able to be there with you. Take good care & let's meet when you return. Regards, Vahid

Hr. Nielsen! Go get them, whoever they are!